Bush just waiting for the poor to die?

Nine million children in this country lack health insurance. To not have health insurance means they miss well-child checks and may rely on the emergency room for care when they are ill. These aren't necessarily homeless kids - with more and more jobs in this country not offering health insurance, it should be no surprise that 70% of kids without health insurance have at least one parent who works. Kids with chronic diseases may not be able to get the medications and the care they need to stay well. In a country as rich as ours, this is intolerable. The Medicaid Program exists to help the poorest of the poor, and the Children’s Health Insurance Program (S-CHIP) was created to help those not-quite-so-poor get health care. Congress recently voted – both Republicans and Democrats - to extend eligibility for this program to families of four earning up to around $40,000 per year. This would be funded by an increase in cigarette taxes – a move which in itself will benefit public health by reducing smoking, especially among teens and young adults. The majority of Americans support government assistance to help families obtain health coverage. Our president, however, feels that this is a threat to the free enterprise system – a White House spokesman said: “This will have the effect of encouraging many to drop private coverage, to go on the government-subsidized program”. Apparently Dave Weldon agrees with Bush, since he voted against the CHIP expansion. Bush has threatened a veto, and there may be enough votes to override his veto. So now he has ordered the CMS to adopt new rules which would prohibit any state from expanding services unless they have provided services to 95% of those under the poverty level. NO state has that high a participation rate, so he again is trying to get around the desires of congress and the American people.

Also – I have news for Weldon and the president. I am self-employed, and I buy health insurance for my family of four. It is a standard plan – nothing fancy and no dental insurance included. I pay almost $12,000 per year for this. Do Dave Weldon and President Bush really think that a family earning $35,000 or even $40,000 per year can buy health insurance? It just isn’t possible. Long ago our country realized that education needed to be publicly subsidized – that there was a basic injustice in keeping education out of the reach of poor kids. (Dave Weldon would like to do away with public education also)

Kids have no control over their situation. Shouldn’t every child in this country have health care?
Posted by Steve Blythe at 9:26 PM

Read all 3 posts....you get no argument from me! This is a test, just sent a long message that was rejected. Let us see what happens?

Your presentation leaves no room for the kind of nonsense we hear coming out of both Weldon and Washington.
Either you win the election or we all lose!

I heard Dr. Blythe's presentation given at the Sebastian Library on Tuesday, Dec. 4th. It was a sweeping history with economic charts showing the result of those historical voting occurances starting around the 1920's and ending now. Without a doubt, the conclusions were obvious to any honest-hearted individual. We are losing ground fast and at the current rate of demise-----our country should be completely without resources, jobs, education, healthcare, veterans services, home/health insurance affordability any year now. Just let this current administration bomb Iran and see how quickly it all falls apart. Our dollar has little respect now in the world. We simply cannot afford, on any level, not to elect folks like Dr. Blythe NOW. Be selfish------save yourself-----if not for the children and the planet and the rest of mankind!

Dr. Blythe, I finished the Voters' Guide and am starting to refer to it in my communications about the Health Care for All Movement and getting U.S. non-profit, single-payer national health insurance. Today I am encouraging Andrew Rice (Re: U.S. Senate race, Oklahoma) to listen to your outstanding 12 minute audio. If someone reading this does not know about your audio, they could start at the voters' guide and then scroll down and select "FL-15".
www.ninenineohnine.org/pages/Voters_Guide

1. Every one, not just children, should have health care. However, not at the tax payers expense. Start at the source... get the cost of higher education lowered so that doctors are not deeply in debt and have to charge high prices to pay off their education. Open up the medical industry for free enterprise so drug manufactures have to drop their prices to stay in business. Once drug cost and doctor costs are reduced, make insurance companies drastically reduce their cost to make it affordable for everyone. 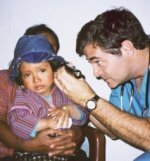 Steve Blythe
Melbourne, Florida, United States
I am a Family Physician. I am fed up with the increasing environmental destruction, the war, the torture and kidnappings, and the inability of patients without insurance to get the care they need - so I am running for congress in an attempt to change things!